“Worrying is carrying tomorrow’s load with today’s strength- carrying two days at once. It is moving into tomorrow ahead of time. Worrying doesn’t empty tomorrow of its sorrow, it empties today of its strength.” 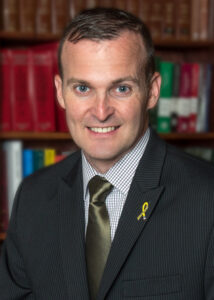 Thomas Roughneen served as an Assistant Prosecutor in Union and Essex Counties for nine years. He opened his own law practice in 2013 to serve the unique interests of military members and Veterans and served on active duty and with other law firms through the years. His general practice is in Morris Plans, New Jersey, where his firm conducts a wide range of civil and criminal litigation, especially for Veterans, Reservists and Active Duty of all branches. (Testimony and Gameplan for Citizen Soldier Law)

He enlisted in 1988 and attended Army Basic Training as a Private in the New Jersey Army National Guard. He received his commission as a Second Lieutenant in 1990 from Rutgers University Reserve Officer Training Corps. After 30 years of service, he retired as a member of the New Jersey Army National Guard with the Judge Advocate General’s Corps (JAG). He previously served in Civil Affairs and Field Artillery. He Commanded a National Guard field artillery firing battery in Morristown, NJ. Following other assignments in the field artillery, he led a team of Soldiers conducting civil-military operations in Kirkuk and the Sunni Triangle in Iraq in 2003 and 2004. He later served as defense counsel to Salim Hamdan, a Guantanamo Bay detainee, before mobilizing again as a military prosecutor at Fort Dix, followed by a tour as a Brigade Judge Advocate in Germany. His last active duty mobilization was as an adjudicator at the Physical Evaluation Board (PEB)  in Arlington, Virginia, where he reviewed Army Soldiers’ claims for disability retirement after doctors completed the Medical Evaluation Board (MEB) and Narrative Summary (NARSUM).

He graduated from Johns Hopkins University, School of Advanced International Studies with a Masters in 2007, received his Juris Doctorate from Seton Hall University School of Law in 1995 and earned his undergraduate degree from Rutgers College in 1991. He earned a Meritorious Service Medal for his service in Germany in 2011 and two Bronze Star Medals during Operation Iraqi Freedom. He is married and is blessed with two daughters and a son. His three brothers are all military pilots, retired and active, and served countless tours in Iraq, Afghanistan and throughout the Middle East.

Formerly, he served as Chairman of the Military Law and Veterans Affairs Section when the New Jersey State Bar Association lobbied for the Criminal Diversion Program legislation.

The use within this website of any reference to military assignments, rank, positions, titles, organization names, or any other military-related reference, does not imply an endorsement, or imply that DoD or any of its components endorse, sanction, or treat this LLC, or any of its members, in a preferential manner. Moreover, any views expressed on this website are those of Thomas Roughneen & Associates, Counsellors at Law, LLC, and do not reflect the official policy or position of the New Jersey Army National Guard, the Physical Disability Agency, the Physical Evaluation Board, the Department of Defense, or the U.S. Government.